Daxing airport to being operations in Beijing Daxing District

As autumn arrived, the first metal birds began to migrate south to Guangzhou from Beijing’s new Daxing Airport. Roughly one month on, the airport waved off its international flight. The Air China flight to Bangkok is just the first of many routes that Beijing Daxing International Airport will siphon off from Beijing Capital International Airport over the next few years. The first intercontinental flights from Daxing to London are scheduled for late November.

Here’s what else is new at the world’s largest airport:

Fifteen airlines are now in the process of moving their operations to Daxing (PKX), a process that will last through 2021. For the time being, airlines will operate out of both PEK and PKX, so remember to always doublecheck which airport you're due to depart from – going to the wrong airport is likely to be highly problematic as Daxing is more than 70km away from Beijing Capital Airport.

The airlines currently moving to Daxing in full or in part are as follows:

More than just a feat of beauty in architecture, the Zaha Hadid-designed Daxing Airport also boasts a fairly environmentally friendly design, notably it's ample natural lighting and good insulation, despite criticism that nothing it could do would make up for the additional emissions that will come from building it. Now, perhaps in part to make up for the inconvenience of its remote location, the airport aims to load up with the latest and greatest tech to make for smoother traveling once passengers finally make it inside.

Like many places in Beijing, Daxing is getting the 5G treatment from both China Unicom and China Mobile, meaning that those with 5G-enabled phones will not be doomed to suffer internet withdrawal due to slow speeds.

Check-in times may accelerate as well thanks to advances in facial recognition technology. The airport’s 400 check-in machines are expected to drastically reduce waiting times as they cut out nuisances like showing ID and boarding passes. China Eastern Airlines even plans to equip VIP lounge staff with augmented-reality glasses that will essentially turn them into helpful Terminators, able to access passenger flight information with a glance.

And, yes, there will be robots. While many of these electronic friends will be operating behind the scenes, you might interact with a forklift friend as it helps you park your car, or with one of the winking service robots that wander around the terminal floors, displaying flight information on their bellies. 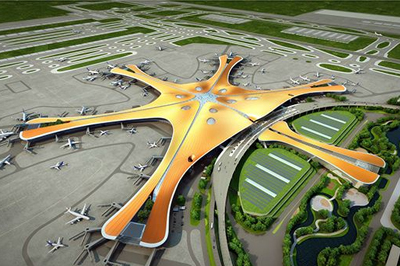 Given a long layover and plenty of time to walk around, passengers may be curious to see what else the airport’s 75 million square feet contain. Apart from the gardens in each wing of starfish-shaped terminal that are meant to evoke Chinese culture, the airport also commissioned the China Academy of Fine Arts to liven up the place with everything from Chinese scroll paintings to a hanging representation of the solar terms that play a key part in the traditional Chinese calendar.

If all of that sounds attractive to the trigger-happy photographer in you, then be forewarned: the airport is not taking too kindly to excessive picture taking, claiming that, with such a huge influx of visitors, it could be safety risk. I guess we'll be keeping our selfie-taking to a minimum.